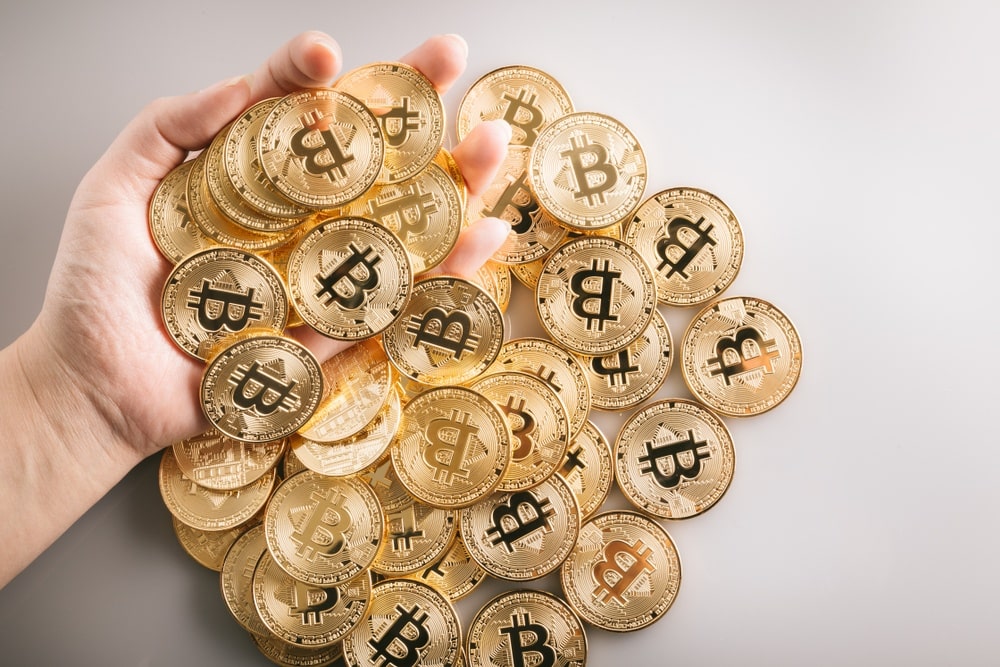 In case you dont already know, there is a finite supply of Bitcoin, the most widely-known digital currency. You might also know that there are two different amounts that are reported the number in circulation, and the total supply. The total supply is 21 million, which is the maximum number of bitcoins that ever exist. The number in circulation is the total number that the miners have dug up.

Once miners have unearthed the total supply of 21 million Bitcoins, then what? What will become of the miners? The Bitcoin mining industry? Will bitcoin mining end? Keep reading.

When Will the Last Bitcoin Be Mined?

Estimates have been thrown around a lot recently as to the year in which the last BTC will be mined- where are these estimates coming from? In a fully decentralized monetary system, there is no central authority that regulates the monetary base. Instead, currency is created by the nodes of a peer-to-peer network. The Bitcoin generation algorithm defines, in advance, how the currency will be created and at what rate. Any currency that is generated by a malicious user that does not follow the rules will be rejected by the network and thus is worthless.

Digital coins are created each time a user discovers a new block. The rate of block creation is adjusted every 2016 blocks to aim for a constant two-week adjustment period (equivalent to 6 per hour.) The number of Bitcoins generated per block is set to decrease geometrically, with a 50% reduction every 210,000 blocks, or approximately four years. The result is that the number of bitcoins in existence will not exceed slightly less than 21 million.

Bitcoin’s blockchain protocol makes mining more difficult as more miners join the pool, and the crypto reward for mining a block also halves every 210,000 blocks. As it stands, miners receive a 12.5 BTC reward for unlocking a new block. The next reward halving will happen in May 2020 reducing the reward to 6.25 coins.

How Much Bitcoin is Left to Mine?

There are currently close to 4 million Bitcoins left that aren’t in circulation yet. With only 21 million BTC that will ever exist, this means that there are about 17 million coins currently available. Out of those 17 million, it’s estimated that 30% of those may be lost forever as a result of things like hard drive crashes and misplaced private keys.

The remaining 4 million coins that aren’t in circulation are in a pool that is designed to reward the miners for maintaining the integrity of the Bitcoin network. 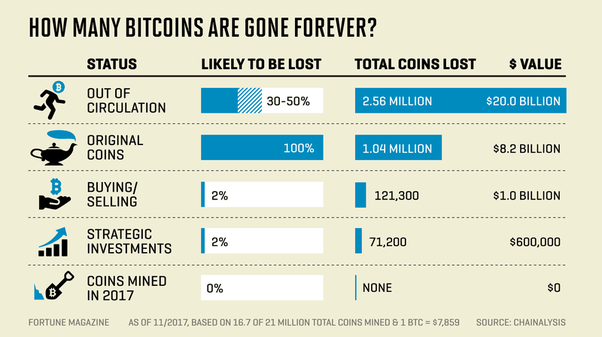 What Happens When All Bitcoins Are Mined?

The block reward given to miners is made up of newly-created bitcoins plus transaction fees. As inflation goes to zero miners will obtain an income only from transaction fees which will provide an incentive to keep mining to make transactions irreversible.

Due to deep technical reasons, block space is a scarce commodity, getting a transaction mined can be seen as purchasing a portion of it. By analogy, on average every 10 minutes, a fixed amount of land is created and no more, people wanting to make transactions bid for parcels of this land. The sale of this land is what supports the miners even in a zero-inflation regime. The price of this land is set by demand for transactions (because the supply is fixed and known) and the mining difficulty readjusts around this to keep the average interval at 10 minutes.

Once a total amount of bitcoins has been mined, there will never be any new coins (unless a change to the protocol is made to increase the supply).

Currently, miners are still heavily incentivized to mine in order to obtain increasingly more valuable Bitcoin tokens as a reward before the supply reaches its capacity.

But, when the day comes that the 21 mln cap is hit, there will be no more BTC rewards for miners. However, transactions still need to be validated and stored on blocks in the blockchain so miners will only benefit from transaction fees.

As it stands, Bitcoin transactions are processed by the network in order of the transaction fee associated with that specific transaction. The higher the fee, the more incentive there is for a miner to prioritize your transaction to be included in a block.

This could essentially be the lifeblood of miners in the next century, once there are no more BTC tokens to be unlocked.

On one hand, there are detractors of the BTC limitation who that say that miners will be forced away from the block rewards they receive for their work once the BTC supply has reached 21 million in circulation. In this case, these miners may need to rely on transaction fees in order to maintain operations. Bitcoin.com points to an argument that miners will then find the process unaffordable, leading to a reduction in the number of miners, a centralization process of the Bitcoin network, and numerous negative effects on the Bitcoin system.

This argument assumes that transaction fees alone will be insufficient to keep Bitcoin miners financially solvent once the mining process has been completed. On the other hand, there are reasons to believe that transaction fees and mining costs will even out in the future. Looking ahead by several decades, it is not difficult to imagine that mining chips will become small and highly efficient. This would reduce the burden placed on miners and would allow mining to become an activity with a lower threshold of the initial cost. Further, transaction fees may increase, and this could help to keep miners afloat as well.

Bitcoin has already seen massive hikes in price in 2017 and 2018. While no one is entirely sure how the digital gold will continue to spread to the larger financial world, it seems likely that a limited supply of the currency may cause prices to continue to increase. There are also stockpiles of inactive coins that are held around the world, the largest supply of which belongs to the person or group who founded Bitcoin, Satoshi Nakamoto. Perhaps this supply, consisting of roughly one million Bitcoins, is intentionally being saved for a time when the global supply is facing increased levels of demand.

Bitcoin in the Distant Future

It is quite obvious that one day all the coins will have been mined and all that will be left as income for miners is the transaction fees. The big question is whether or not there will be large enough to keep miners interested in mining Bitcoin. 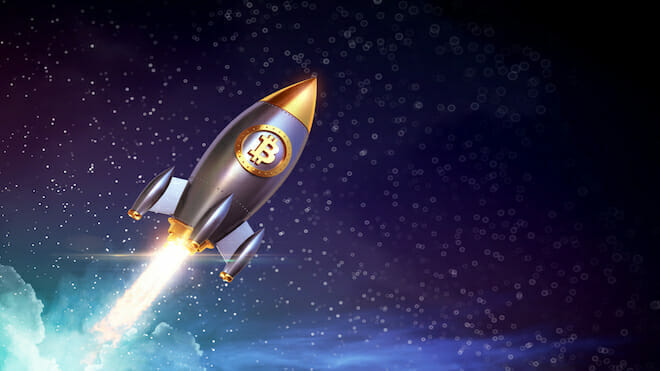 We have no idea how mining technology will change at that time:

It’s possible that mining chips will become so small, powerful and cheap that they’ll be in nearly any electronic device. If this were true mining could simply happen in the background, maybe in the electronics in your car or even your refrigerator, all without any intervention from you. It’s also possible that energy costs will drop so low that even small fees will remain profitable.

Another potential scenario is that mining fees simply continue to rise to keep pace with the cost of mining. If the entire world is using Bitcoin by the time all the coins have been mined, the demand for the very small supply of 21 million Bitcoin could make transaction fees very high. Think what transaction fees might be if John McAfee is correct and Bitcoin goes to $1 million and beyond.

While it remains a possibility, the probability of transaction fees rising that high seems low at this time. The consensus in the current Bitcoin community is that block size needs to increase to accommodate scalability. And if block size continues to grow transaction fees will remain low.

This might seem troublesome at first glance, if network transaction fees remain low, what will entice miners as blockchain rewards continue shrinking to nothing? The issue is that not increasing the block size is an even greater threat to the network. Once blocks reach their maximum size no more transactions can be confirmed until the next block is created, and this could lead to dropped transactions. We saw how this might happen in December 2018.

While such a scenario would almost surely mean higher fees for miners, it would also discourage people from even using Bitcoin, and this could be a death knell much sooner than any other issue currently facing Bitcoin.

The fixed supply of Bitcoin means block rewards will go away, hopefully creating the opportunity for transaction fees to become just as profitable for miners. This could occur through basic monetary theory. Once all of the Bitcoin has been mined, the fixed 21 million supply has no way to keep up with growing demand. The discrepancy between supply and demand than could be enough to increase the purchasing power of Bitcoin. If the purchasing power continues to rise it could keep mining profitable no matter what the fees are, as they will be seen as an increasingly valuable asset. Mining would at that point be more like a long-term investment rather than simply a profitable activity.

As you can see, there are several possible ways for mining Bitcoin to remain profitable and enticing, even after miners stop creating new coins. Additionally, the block rewards won’t just disappear overnight, but will slowly decline over time, which gives miners the chance to adapt as the block reward declines and transaction fees become increasingly important.