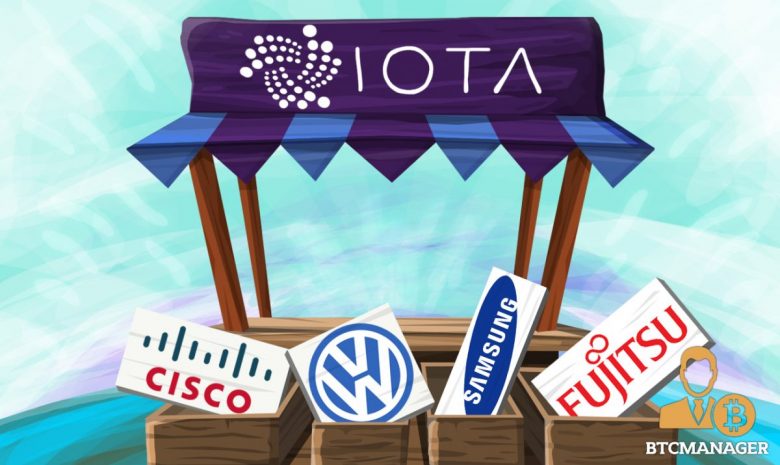 IOTA is named as such because it is known as the Internet of Things (IoT) – its aim is to connect the world of electronic devices. The companys goal is to form partnerships with electronics manufacturers in order to connect their products via the IOTA Tangle. The tangle is referred to as a ‘next generation distributed ledger’ where the businesses that benefit from the technology would actually be serving as nodes on the network. IOTA already has an impressive list of partners: Microsoft, Tesla, Porsche, Fujitsu, Volkswagen, Samsung and many others.

As IOTA puts it, data is the new oil. The IOTA Data Marketplace is rapidly growing, and the vast amounts of data it collects will help mold the future of technology. With all of these recent developments, IOTA is headed toward some major achievements this year. Let’s dive right in and see what IOTA has been doing.

In November, 2017, IOTA announced the launch of the world’s first publicly accessible data marketplace powered by a distributed ledger for the Internet of Things (IoT) in conjunction with companies like Microsoft.

The idea was to monetize data, the ‘oil’ of the IoT economy. It would allow stakeholders to share and monetize their data in a secure way. If proven, this will enable them to cash in on various data plays like weather station statistics. “Any kind of data can be monetized,” said IOTA co-founder David Sonstebo. “If you have a weather station collecting wind, temperature, humidity, and barometric data, for instance, you can sell that to an entity that is doing climatic research.”

On the other hand, in December, 2017, IOTA clarified that it currently has no formal partnership with Microsoft. While Microsoft blockchain specialist Omkar Naik stated via email correspondence with IOTA: “We are excited to partner with the IOTA Foundation and proud to be associated with its new data marketplace initiative.”

Anyway, the two companies are continuing to collaborate on a series of technology innovation exercises with IOTA’s Tangle network. Despite the lack of a legal partnership, companies participating in IOTA’s testing of Tangle are expected to continue with testing in the long-term.

Behind the scenes of the crypto-coins is the news of a partnership between the luxury car maker Tesla and the IOTA token, according to information not officially confirmed, the partnership has been developed to insert autonomous payment systems in Tesla vehicles.

IOTA is a crypto-currency that revolutionizes the classic blockchain with its technology called Tangle. The Miners are totally removed and with them the electricity costs due to the confirmation of the transactions. This is because each user, in order to send a transaction, confirms two more in turn, so as to obtain definitive decentralization and solve bitcoin problems. So using IOTA to transfer money is totally FREE and scalable indefinitely. While TESLA engineers have now developed software that allows cars to drive themselves, this system now tested is tens of times safer than the classic human driver subject to fatigue, alcohol, distractions, nervousness etc.
Can you imagine how these two innovative systems could work together? The machines could own their own wallets that they could use to recharge at electric stations or offer passages to people who need them in exchange for payments with IOTA. In this way there would no longer be real owners but it is technology that becomes owner of itself and makes itself available to all of humanity.

Recently a similar project, based on IOTA and the Tangle network, ranked second in the Porsche innovation contest.

IOTA will work together with Porsche on the Program 4 project, which was backed by platform Startup Autobahn. IOTA and Porsche will work along with other startups on a program focused on smart mobility. “Startup Autobahn is the ultimate innovation platform that unites tech companies with the tech expertise of Silicon Valley & the best of German engineering,” IOTA News said in a tweet.

The Autobahn startup picked IOTA among other tech startups to work on an innovative platform for Smart Mobility. With the IOTA technology as the center-piece for this project, the future of smart vehicles and autonomous vehicles is sure to reach new heights.

Robert Bosch GmbH, more commonly known as just Bosch, is a multinational engineering and electronics company headquartered in Germany. They’re actually the largest supplier of automotive components in the entire world. But selling data is the future and Bosch views IOTA and autonomous cars as a great way to collect micropayments and information. IOTA and Bosch were partnering up to transform entire cities into smart cities.

IOTA is already in the process of turning Taipei, Taiwan into a smart city. This includes creating citizen ID cards on the Tangle technology that will eliminate risks of identity theft and voter fraud, while also providing a simple way to track health history and other data for government-related services. IOTA is also working on creating a palm-sized card with sensors that can detect light, temperature, humidity, and pollution levels, in order to provide Taipei’s citizens with up-to-date information about their environment.

Together with a number of other prominent businesses from all around the world, Bosch are also part of the IOTA Data marketplace, with the goal of increasing the adoption of distributed ledger technology. It will be very interesting to see how IOTA works with Bosch to revolutionize cities in China. We’ll just have to wait until they release more information to see what their exact plans are.

What comes out of this partnership remains to be seen, but from the outside-looking-in, this move seems to be a step in the right direction for the IOTA Foundation. Fujitsu has revealed it is going to be introducing people to IOTA Technology at the largest Industrial trade fair in Hannover Messe, Germany. The introductory seminar which Fujitsu tagged ““Intelligently connected”: Experience Industry 4.0” is part of Fujitsu World Tour 2018 and a part of it will also take place during the Trade fair.

The Fujitsu system demonstrated at Hannover wasnt a hypothetical glance at the future, but a Tangle-based system to be rolled out at Fujitsus Augsburg smart factory. IOTAs Tangle overcomes the traditional limitations of distributed ledger technology, explained Rolf Werner, the head of Central Europe business at Fujitsu. Its energy efficient, offers feeless transactions and scales extremely well, making it well-suited to becoming the industry standard of automated systems and a wider machine-to-machine economy.

Are IOTA partnerships real or its fake?

Some cryptocurrencies are known to use fake news to pump up the price, but is it the case with IOTA partners? Maybe IOTA uses needed partnerships with famous brands to get its momentum going once again in the markets. And one of the brightest examples is its partnership with Microsoft. The news resulted in a huge spike in price when the cryptocurrency increased over 500% from around $1 to over $5 at its peak back in December 2017. Another example is when IOTAs token, referred to as MIOTA, at one point added 19% for the day after announcing about its partnership with Porsche in May, 2018.
Meanwhile, IOTA is getting more popular and announces more and more news about its partnership with other big name companies and institutions like the Oslo University and the Technical University of Munich. Who knows, maybe IOTA is in secret partnership with some other prosperous giant in Japan, USA or Europe right now that will help to increase the price of the MIOTA coin in the nearest future.

IOTA is the next generation platform that aims to connect all devices on its network to the IOTA tangle. Its ledger does not consist of transactions grouped into blocks and stored in sequential chains. The ledger is a stream of individual transactions entangled together. IOTA allows for the distribution and synchronization of ledgers of data and money in secure, distributed, decentralized and permissionless environments.

This Tangle is the missing link for the Internet of Everything that will empower machines and humans to participate in flourishing new permissionless economies. The machine economy is what the above partnerships will enhance.

Everything indicates that Iota has been leading the integration of the altcoins with the physical world through its unique network, with no fees, scalable is designed for IoT. This is only a first big step, but for years now we are talking about IoT and the possibilities are really endless. It is hard to admit it but in some fields technology is better than us, the good news is that we can use it to our advantage.

However, this is a true value coin to invest in while the price is low and new expansion plans are rolled out to tap into the Tangle full potential. And what do you think about all this hype over IOTA partners?