Bitcoin is a decentralized cryptocurrency and there is no standard or anyone to dictate what it should be or how its name should sound. Even Satoshi Nakamoto, the founder of Bitcoin, didn’t give an abbreviation to it. Since there is no one in charge to set naming standards, Bitcoin is called by two different abbreviated names: BTC and XBT.

The acronym follows the sound of the name Bitcoin, so it is called BTC. Makes perfect sense, doesn’t it? But how was the XBT name created? Let’s take a closer look!

As you may already know, XBT cryptocurrency is your Bitcoin (XBT). But why do we need two ticker symbols? To answer this question, let’s remember that Bitcoin is not a national currency produced by any specific country. It exists with no single point of origin.

Since Bitcoin (XBT) is nationless, it is, therefore, a decentralized coin. It also means that nobody can control it. But this is where a few challenges arise. One of them is the currency name because there is no standard procedure for naming. This is how we got two different abbreviated names for the same crypto: BTC and XBT. No one has enough power to set naming standards for a decentralized currency. I believe that the founder of cryptocurrency, Satoshi Nakamoto, purposely didn’t give Bitcoin an abbreviation, so that the community could have full control over the coin.

XBT vs BTC: Whats the Difference?

Well, the original acronym given to the cryptocurrency at its emergence in 2008 was BC (who would ever know). But on the exchanges people would start using the three-letter BTC like an ISO code of a currency or stock on Wall Street. However, BTC doesn’t actually follow the International Standard Organization (ISO 4217). According to ISO, the first 2 letters of the 3 letter symbol should be the country code, and the last letter should be the initial letter of the national currency. On the other hand, “BTC” conflicts with Bhutan’s currency which is BTN (Bhutanese Ngultrum).
Check out our Bitcoin History guide 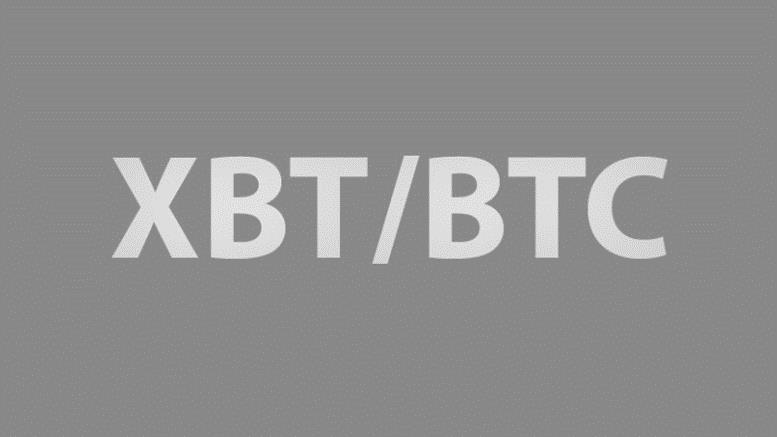 As Bitcoin gained more popularity and interest, in August 2013 BTC Geek leaked that the Bloomberg terminal had added the coin as XBT to its ticker in 2013. This abbreviation conforms to ISO 4217 since the first letters of a country code denote the country. And since Bitcoin is not associated with any country, just like Gold (XAU) and Silver (XAG), it gets an X. XBT also meets international banking standards.

What is XBT on Kraken?

As you might guess, it will take some time (maybe even lots of time) until all exchanges and Bitcoin lovers agree to switch to XBT, stick with BTC, or invent something new. As of now, only a few exchanges have switched to the XBT symbol for trading Bitcoin on their websites. And Kraken is one of them.

Bitcoin futures are now available for trading on the Cboe Futures Exchange, LLC (CFE) under the ticker symbol XBT. This brings many benefits to traders, including transparency, efficient price discovery, deep liquidity, and centralized clearing.

XBT CBOE futures are cash-settled contracts based on the Geminis auction price for bitcoin, denominated in U.S. dollars. Gemini Trust Company, LLC (Gemini) is a digital asset exchange and custodian founded in 2014 that allows customers to buy, sell, and store digital assets such as bitcoin, and is subject to fiduciary obligations, capital reserve requirements, and banking compliance standards of the New York State Department of Financial Services.

With the XBT futures, you can buy and sell bitcoin futures in a highly regulated marketplace nearly 24 hours a day, five days per week. This gives you the flexibility to invest and divest at the optimal time for your specific trading strategy.

XBT futures is a cash-settled contract that settles to a single, tradeable auction price. In designing XBT futures, Cboe leveraged its significant product development expertise to design an instrument that allows participants to implement trading strategies in a manner to which they are accustomed. The single price settlement process gives participants the option of using XBT futures to hedge their exposure in underlying bitcoin or gain exposure to traded bitcoin prices without holding bitcoin.

Where to Trade XBT Futures?

The world’s second-largest stock exchange, Nasdaq, has confirmed it plans to launch Bitcoin futures in the first half of 2019.

Nasdaq’s planned futures contract will purportedly be the first of a set of “transparent, regulated and surveilled” digital assets products to be jointly launched as part of its recently announced partnership with U.S. investment firm VanEck.

VanEck is also currently awaiting a final decision from the U.S. Securities and Exchange Commission (SEC) on its joint proposal for a physically-backed Bitcoin exchange-traded fund (ETF) together with blockchain software and financial services firm SolidX.

XBT is not different from BTC, as both of them refer to Bitcoin. Just remember that BTC is the preference of the native crypto community while XBT is used in traditional finance settings. It remains to be seen which will be used in the long term. Which Bitcoin symbol is more appealing to you: XBT or BTC?